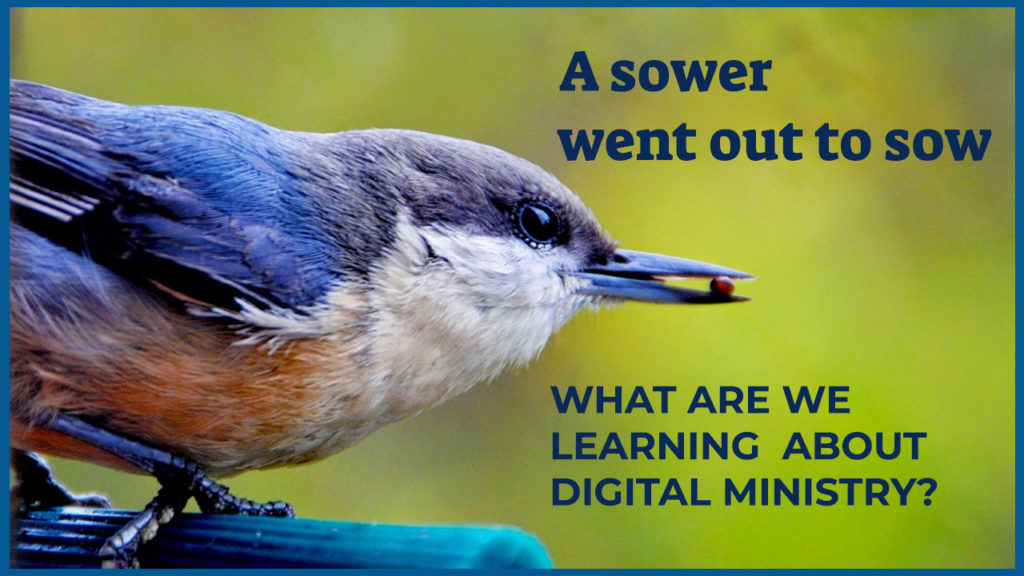 “Listen! A sower went out to sow. And as he sowed, some seed fell on the path, and the birds came and ate it up. Other seed fell on rocky ground, where it did not have much soil, and it sprang up quickly since it had no depth of soil. And when the sun rose, it was scorched; and since it had no root, it withered away. Other seed fell among thorns, and the thorns grew up and choked it, and it yielded no grain. Other seed fell into good soil and brought forth grain, growing up and increasing and yielding thirty and sixty and a hundredfold.” And he said, “Let anyone with ears to hear listen!” Mark 4: 3-10

I owe the birds an apology. I have always made them out as one of the bad guys in the parable of the sower –just another thing that’s working against our poor farmer friend—pesky birds eating up the seed as it is sown.  But just recently as I was clicking through some articles on the internet, as one does, I found a little story about how birds can sometimes help seeds to find good places to take root. Birds can carry the seeds away from a plant (or a sower if they happened across one) and drop them on ground that is further afield – where a plant could even have an even better chance of making its way without the competition of other seeds. Birds might knock seeds from stems, crack seeds open and help them germinate and a bird can carry a seed to a place that a sower might never reach. And my favourite example– a bird might drop some undigested seeds, yup this means poop, and leave that seed somewhere in its own tiny pile of fertilizer where it finds its own happily ever after! So apologies are in order to my feathery friends, I was too quick to cast you as scoundrels in this parable.

Digital media and ministry: can we sow this rocky ground?

This familiar parable of a precarious farmer has always connected with my image of technology and ministry. There’s no question that the internet is a place ridden with thorns and rocks – from global corporations that exploit people and the earth, to scammers who take advantage of vulnerable people, and haters who magnify their own voices and join forces with trolls and bullies. It’s a place where time is wasted and stolen from other good ways of connecting, in a world where there’s just not enough time. Where some people choose to turn away –and that’s a choice I can respect – I choose to see it as a ground that still holds some promise, especially if we can find some new friends – maybe even some friends we previously didn’t recognize.

Lessons from the birds

Which takes me back to the birds. I have been struck many times about how a story that is posted on-line can reach into places where I never thought it would go. Personally, I’ve heard more than once from someone on the other side of the world who has found hope in stories from this church about celebrating with lgbtq+ folks. In my mind, I was sharing photos for our network, without thinking they would serve to lift someone’s spirit so far away. Closer to home, I’ve seen many times how somebody speaking a truth on-line, perhaps one that is too hard to say out loud in person, can echo in someone else’s life in a profoundly meaningful way. For example, someone shares about how depression is a real thing in their life and what that means and that cracks open a seed and creates a connection that we didn’t know was there. Now I must offer an example of the DIY fertilizer variety, a.k.a. the pooped out seed. There are countless times I have uncovered through social media an example of something ready to use – left on-line by someone who has already done the work – a resource is already written, a lesson already learned, a sermon note already hit, a connection already forged. Sometimes you have to wade through a bit of waste to get there, but very often this search is richly rewarded.

However one of the best reasons I know for sticking with weaving together technology and worship is more related to the lesson from the birds themselves – it helps me see the world differently, hear different voices, recognize common cause where I did not know it before. I can learn from voices of diverse people who are not in my day to day circles. Instead of trying to find a representative from a particular group to come and speak to my group, I can go to them. This feels more like right relations to me. There is a pathway scattered with seeds, spread by birds, that I am free to follow that I didn’t know before.
Is it enough to engage on-line, or to only listen to diverse voices, to sign an on-line petition or share a significant story in my feed? Not nearly, not ever. On-line activism will never replace the need to show up in the street, or to engage in person, and those elements will always be a part of my own expression of faith.

But social media, for example, leads me to engage differently, I can show up when #idlenomore sounds the call to gather at Dundas Square for a round dance. I might know when a friend needs a visit or a word of encouragement because of something that they post if I take the time to read what others are writing. I am cracked open by learning things from seeds flung far and wide that I would never come across on my own path. These kinds of benefits make it worth it to me.

Sower went out to sow blog: what will it look like?
In this blog in the coming year, we will set out on a journey to learn from others on this path of sowing seeds of digital media and ministry. I’m interested in the tools you are trying, in what you are learning, in how you are tending new initiatives, in where you are finding new life. I’m also interested in what didn’t work and what we can learn from those experiences. Instead of a broad discourse on the virtues or vices of social media, I’m looking for stories of people in ministry who are trying something out. Approximately, every two weeks I or one of my colleagues will lift up one example and share it here. I hope that there will be some seeds scattered here – both fresh and previously digested – that may sprout new beginnings.

Join the conversation by leaving a comment. If you are experimenting with digital media and ministry join our conversation – all levels of experience are welcome.