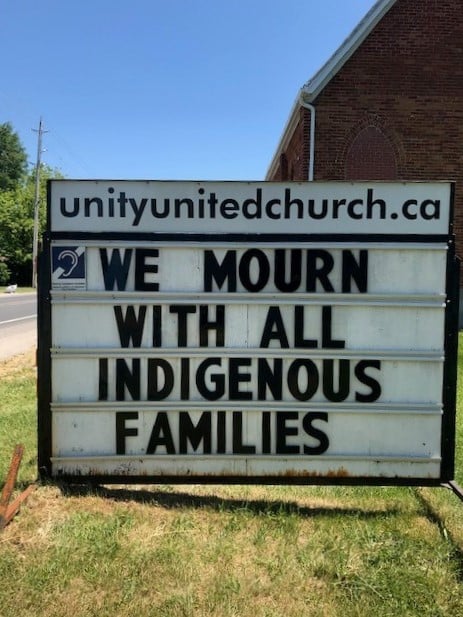 This message comes from Indigenous Ministries and Justice at The United Church of Canada.

If you are a residential school or intergenerational survivor and this content is upsetting, please call the National Indian Residential School Crisis Line at 1-866 925-4419.

As news came on May 28, 2021 that the remains of 215 children were found in a mass, unmarked grave on the grounds of the former Kamloops Residential School, we entered into a time of mourning for these relatives, their families, and their communities.

Gatherings were held around sacred fires across the country. Prayers were sung and spoken. Church bells were rung. Orange ribbons were tied on branches and fences. Shoes were laid out on the steps of churches and government buildings. Candles were lit and flags were lowered as a sign of respect.

Three generations of the Burns family (Russel, Charlene, Russelle, Jacob, and Jenny) travelled into the Rocky Mountains to make a tobacco offering for each and every one of these 215 children. Russelle offered this reflection:

My heart has been heavy since hearing about Kamloops. It was an absolute BLESSING to be with Nikâwiy ewka Nohtâwiy [Mother and Father] this weekend…. Nohtâwiy didn’t do one offering for the 215 children found, instead he took the time to offer tobacco for every single one of them. My prayers were for the Mosoms, Kokoms & Chapans [Grandfathers, Grandmothers, and Great-Grandparents] those little souls never got to grow up to be…. I know they’re happy today, dancing and enjoying all the prayers being sent! Jenny & me PROUDLY wore our orange shirts today.

Indigenous Ministries asks all of the church to continue in this time of mourning and of support for each other as we grieve this loss, and others that we do not yet know about.

You can show this by doing any of the actions named above. You can use one or both of the prayers created by Indigenous Ministries Executive Minister Murray Pruden and Moderator Richard Bott. You can support those organizations in your community, such as Friendship Centres, that support Indigenous people who live with trauma every day.

We understand the desire to do “something” that will make this right. But we ask you, right now, to come together as people of the United Church and take the first step of mourning and remembering.

We give thanks for this day and each day you grant us life to walk on this great land, our Mother.

Give us the heart and strength to come together in prayer in this time of mourning, reflection, and peace.

The news we have heard these last few days is of our relations, our families, the children who have been physically taken away from us and who have now been found.

We pray for good understanding, guidance, and love for all our families and communities who will need direction and resolution at this time.

And we come together in prayer and ask for your light to guide us to be a part of that needed peace, support, and resolve for everyone who is reacting to this great tragedy in our Indigenous Nations of this great land.

Calls to the Church and Calls to Action

Following the release of the Truth and Reconciliation Commission’s 94 Calls to Action, a group of Indigenous leaders (“caretakers”) in the United Church discerned a way forward for the Indigenous United Church. In July 2017 the National Aboriginal Spiritual Gathering in Pinawa, Manitoba affirmed the document, Calls to the Church, and it was approved by the 43rd General Council in 2018 and implemented.

The United Nations Declaration on the Rights of Indigenous People (UNDRIP)

Often cited as foundational to reconciliation UNDRIP is primarily about survival, dignity, and well-being. Although Canada did not initially sign on, we have since done so.

Truth and Reconciliation Commission of Canada

They Came For the Children.
A brief educational history on residential schools for the Canadian public, produced by Truth and Reconciliation Commissioners.

Truth and Reconciliation Commission of Canada 94 Calls to Action

Indigenous-owned and operated, GoodMinds Book Store Book Store in Brantford, Ontario, is recommended by the Woodland Cultural Centre as the best place to find and order First Nations, Metis, and Inuit books, including books for children and school curricula.

Braiding Sweetgrass: Indigenous Wisdom by Robin Wall Kimmerer. “For only when we can hear the languages of other beings will we be capable of understanding the generosity of the earth, and learn to give our own gifts in return.”

Final Report of the Truth and Reconciliation Commission of Canada. Volume One Summary

Indian Horse by Ojibway author Richard Wagamese. A harrowing novel about a survivor of a residential school, the effects on the survivor’s life, the transforming role of hockey, and the spirit of reconciliation. In 2013 Wagamese gave a moving presentation at UBC about the redemptive writing of his story of Indian Horse.

Indigenous Relations: Insights, Tips & Suggestions to Make Reconciliation a Reality and 21 Things You Didn’t Know About the Indian Act. Bob Joseph, Gwawaenuk Nation, is an author and Indigenous corporate trainer. He comes from a proud potlatch family, is an initiated member of the Hamatsa Society, and is the son of a hereditary chief. Both books are available online.

Mamow Be-Mo-Tay-Tah: Let Us Walk Together. Be-Mo-Tay-Tah: Let Us Walk Together. A compact book of essays, reflection questions, and prayers written by Indigenous people for churches to engage with the issues of the TRC and better understand the legacies of colonization. Produced by the Canadian Ecumenical Anti-Racism Network, the Canadian Council of Churches. Free digital download.

Moon of the Crusted Snow by Waubgeshig Rice. A novel from Ojibwe journalist Waubgeshig Rice about the end of the world as seen through the eyes of people living on a northern Ontario First Nation.

Unsettling the Word: Biblical Experiments in Decolonization, edited by Steve Heinrichs. Over 60 Indigenous and settler authors wrestle with scripture, re-reading, and re-imagining the text, reclaiming it from the dominant powers.

When I Was Eight by Christy Jordan-Fenton and Margaret-Olemaun Pokiak-Fenton, illustrated by Gabrielle Grimard. A story book introduction to residential schools for young readers. Based on one of the author’s true story, the book that tells the story of a young Inuit girl who experiences abuses in a residential school but who triumphs by teaching herself to read.

Gordon Downie’s Secret Path. After the late singer/songwriter Gord Downie was diagnosed with glioblastoma brain cancer, he dedicated the remaining months of his life telling the story of the short life and tragic death of residential school student, Chanie Wenjak. Downie wrote and produced an album and Jeff Lemire illustrated Downie’s songs in a graphic novel and an animated film.

Cree Code Talkers. The story of Corporal Charlie “Checker (Chicksees)” Tomkins and the unacknowledged role of the Canadian elite covert Cree Code Talkers in World War 2. Their codes to transfer information were made up of Cree and invented Cree words and were never broken.

Indian Horse. A film based on the book by Ojibway author, Richard Wagamese.

Niigaanibatowaad Frontrunners Frontrunners.  In 1967 when Winnipeg first hosted the Pan American Games, ten outstanding athletic teenage boys from a residential school were chosen to run 800 kilometers over an ancient message route with the Games torch. When the runners arrived at the stadium, they were not allowed to enter with the torch. Instead, a non-Indigenous runner was given the honour. Thirty-two-years later, the province of Manitoba issued an official apology. Originally a play written by Laura Robinson, the film features two of the original frontrunners and a study guide was developed.

National Centre for Truth and Reconciliation