The time is up 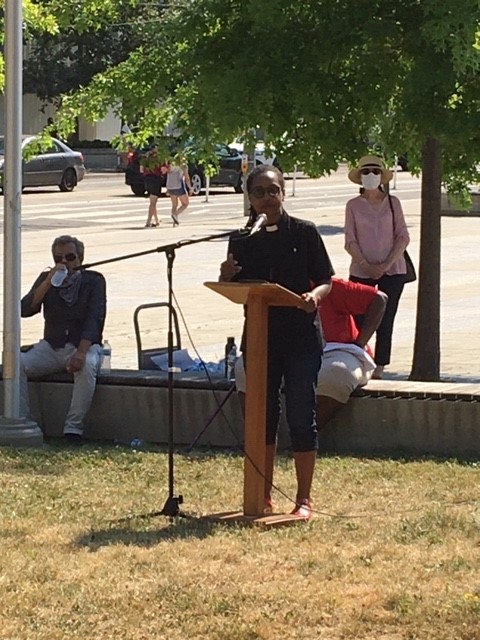 Rev. Maya Douglas speaks at a rally on Canada Day 2020 about the need to de-colonize ourselves and our country.

After 500 years of the colonization of Turtle Island, there is an urgent need to end Canada’s legacy of racism

The Rev. Maya Douglas felt compelled to act after nooses showed up at a local construction site near her home in Toronto’s East End this summer. Maya was serving Queensville Holland Landing United Church at the time and has since started a new pastoral relationship with St. James United Church in Etobicoke.

The Rev. Maya Douglas, presently a minister at St. James United Church in Etobicoke, was devastated when she learned that nooses had been found this summer at a construction site at Michael Garron Hospital, not far from her home in Toronto’s East End. Maya immediately knew what the nooses were meant to evoke: the lynching of Black people. It was early June, mere days after George Floyd had been brutally murdered by a white police officer in Minnesota. As the month unfolded, more nooses would turn up at other construction sites in the city. But it was the incident at Michael Garron Hospital, where she had given birth to her two daughters, followed by a subsequent call to bless the site, that catapulted Maya into advocacy work.

On Canada Day 2020, she delivered a heartfelt, empowering address at a protest rally in Regent Park. As one of the main speakers at the rally, she spoke of the need for Canadians to decolonize themselves, as citizens of a country whose history is much older and more complex than what Canada Day commemorates. She also acknowledged that, while we often look to the U.S. border in an attitude of smug superiority when it comes to the topic of race relations, Canada has its own history of slavery, not to mention its own contemporary realities of police violence and dehumanization of Black people. After thanking participants for risking their lives by attending the rally in the midst of the pandemic to “stand in solidarity against the sin of racism,” she offered words of pastoral support and affirmation: “I see you. I hear you. I affirm you. You are not alone.” And then she insisted that the time for action is now—in fact, it’s overdue: “Time is up!” she declared. After 500 years of the colonization of Turtle Island, there is an urgent need to end Canada’s legacy of racism.

Maya spoke wearing her clergy collar in order to send the message that the church values Black and Indigenous lives. While she noticed that some of the Indigenous people gathered weren’t initially trusting of her presence, the tone shifted when she acknowledged the paradox she embodied as someone who represented the church but had also experienced intergenerational trauma as a person whose ancestors were enslaved in a church-supported system. “This was all under capital “C” Church—the Roman Catholic Church,” she explains. “The Church was involved in and very much aware of the slave trade. It didn’t actually stand up and say, ‘No, Black people are humans too. You can’t own them and sell them and breed them like animals.’ So I recognize that—there’s this paradox of me standing up as a Black woman in a clergy shirt, and in a way that is a protest, in that I know it is triggering but I also know that I belong in church leadership. I bring something to the table that is quite different.”

Several other United Church ministers were present at the rally, for which she was grateful. The Black Clergy Network, of which Maya is a part, also offered a time of online prayer and worship this summer to provide lament and hope around the issue of anti-Black racism in our church and country. Several regional councils (including Shining Waters) and faith communities have offered statements on anti-Black violence and racism. More recently, General Council has approved a proposal for The United Church of Canada to become an anti-racist denomination.

However, Maya is mindful of the ongoing work that still needs to take place. The United Church must not decide that its anti-racism work is done. “It’s not enough to find Black leadership,” she says. “The community also needs to be engaged in anti-racism work. You don’t become anti-racist by hiring Black people. It’s a horrible quick-fix because it puts you to sleep. And if you want to be ‘woke,’ being aware of how you are functioning within a racist system is essential.” She points to the presidency of Barack Obama as an example of how people were convinced that they had “arrived” when their anti-racist work was far from complete. We need to be careful of complacency. Policies, practises, attitudes, and hearts need to change.

In speaking at the Regent Park rally as a minister, Maya is aware that she represented her vocation more than her community of faith. In putting a public face to her profession—by exercising her voice at a protest—she took a risk. But she also knows that standing up against injustice and preaching the gospel is always risky: what Jesus did and what he said got him killed, she observes. In bearing witness to the death of George Floyd and the many other losses of Black life, she is reminded of what it must have been like for the disciples at the cross:  “You want to turn away—you cannot imagine how this person who you know as the Messiah, as your friend, is being humiliated in front of your eyes, is dying a tortuous death, so you stay there and you stand and you bear witness.” Bearing witness to death and then the glorious resurrection presents us with a clear choice, she adds: “Are we going to live into the transformation that God is calling us to, or are we going to consume it as just something else at which to stare?”