From dirt to delicious 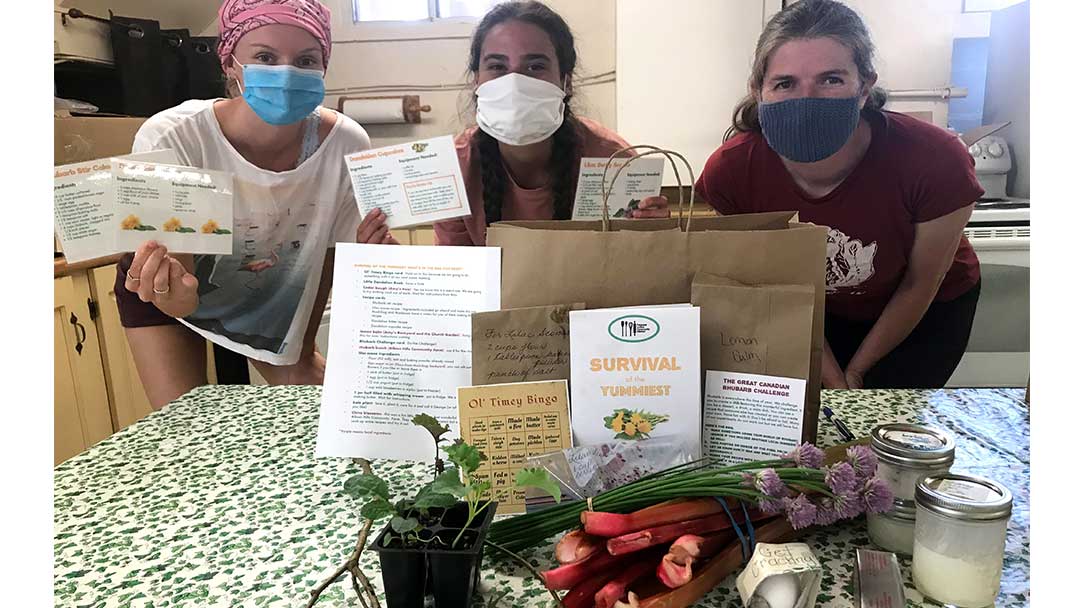 Three leaders with Dirt to Delicious, a locavore camp based out of Palgrave United Church, show off some of the subscription box surprises. Photo Barb Imrie

Foraging for dandelions. Making sourdough bread and homemade cheese from scratch. Growing backyard veggie gardens. These are just some of the old timey traditions making a comeback in the coronavirus era. But Palgrave United Church’s creative brainchild, Dirt 2 Delicious Camp (or D2D for short), started reclaiming some of these vintage skills years ago—long before the pandemic made them trendy.

With a focus on harvesting local, sustainable food and honing environmental skills and systems, D2D is a beloved fixture in the Caledon community. “We have campers who return every year and love it. And we love it too. We would all be sad to see the year go by without D2D,” says Amy Darrell, a long-time D2D leader. The locavore camp is part of Palgrave United’s green culture as a congregation that has long had a reputation for its environmental ethos. “We are known as the environmental church,” explains Barb Imrie, a retired outdoor educator and co-leader, who adds that the church has many connections to the local food movement. Its most recent initiative, for example, is a pilot pesto project that partners with Albion Hills Community Farm.

D2D builds on these community connections, promoting local food, farms, people, and organizations. As businesses flounder in a pandemic economy, the camp’s support for the local economy is vital. “We pay for every single ingredient,” Imrie says. “We don’t ask for donations.”

But this year, not surprisingly, D2D is doing it all digitally. Understandably, given its roots in the land, relationships, and community, there’s been some nostalgia for camps past. “It’s not the same,” admits Imrie. “What we really love is the kids getting creative in the kitchen together and the community-building. A lot of them are burned out from doing everything virtual.” “To be honest, we are still trying to figure out what the online programming looks like,” adds Darrell. “So it’s like, where’s the sweet spot? We want to interact with the kids, but part of the magic of the camp is that it’s very camper-led.”

In past years, the camp was held in Palgrave United’s top-notch community kitchen, a space that allows for lots of experimentation and lots of mess. This year, Darrell and Imrie have tried to capture some of the fun in subscription boxes, geared for ages 8 to 14, filled with recipes, activities, local ingredients, and cool surprises: cedar bough for making cord out of bark, lemon balm, kale plant, chive blossoms, rhubarb bunches, and much more. Ideal for young foodies and master chefs, the subscription includes access to the online platform, extra resources, cooking contests, and weekly D2D virtual meetups.  Each camp-in-a-box has its own creative theme, from Sow Seedy, to Survivor: Life Hacks for the Kitchen and Beyond, and Don’t Be Wastey.

Olivia Gregersen Curtis, a 14-year-old camper, loves the boxes. She’s grown the kale along with some tomatoes in her backyard garden, and recently served them up together in a salad for her family. “It was very good!” she says proudly. She also enjoys the weekly meetups, which give her a chance to check in with others and forge friendships.

Then there’s the infamous “Maddie Moments,” as they’re known. Two of the summer students hired through the Canada Summer Jobs program for the camp, both named Maddie, offer some light-hearted, fun-loving blooper footage that engages playfully with activities and recipes offered in the subscription box.  All this is to say that D2D is meeting campers where they’re at, adapting to their lives, and coming up with some ol’ timey treats to help them survive these strange times.

When asked about why it took a pandemic for mainstream culture to find the joy in reclaiming age-old traditions, Darrell pauses and says, “Maybe it was a catalyst for something people were wanting to have more of in their life, and it just gave them that extra push to look into and try new things.” As the world around us changes at breakneck speeds, hopefully Palgrave United, and D2D Camp, will keep offering more for modern life, and making old things new again in the process.