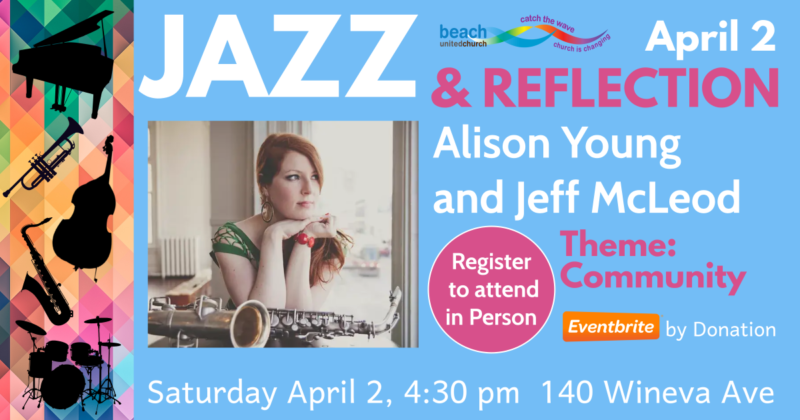 Join us for Jazz and Reflection with the highly energetic Alison Young on Saxophone and Jeff McLeod on Piano. Theme: Community

Born and raised in Ottawa, JUNO nominated saxophonist and composer Alison Young discovered jazz at an early age, gravitating towards the exuberance of Sonny Rollins and Cannonball Adderley, who continue to influence her to this day. As well as being featured in the National Youth Jazz Ensemble at the Ottawa jazz festival in 2001 and 2002, she began playing professionally as a teenager, developing an affinity for soul and R&B as well as jazz. Since moving to Toronto in the early 2000s to study music at the University of Toronto, Alison has been an active presence on the Toronto jazz scene. She composes and arranges music and has an energetic style that will not only impress you but lift your spirits.

Pianist, organist, composer and arranger Jeff McLeod has played with many great musicians. His debut release, Double Entendre, was nominated for a 2012 Western Canadian Music Award for Jazz Album of the Year. His second album, Belaney’s Secret was co-led with saxophonist Donny Kennedy and released in 2013. Jeff has recently recorded material for Alison Young and John Pittman.

Tickets are by Donation at Eventbrite: https://www.eventbrite.ca/e/jazz-reflection-in-person-alison-young-jeff-mcleod-tickets-290452771057