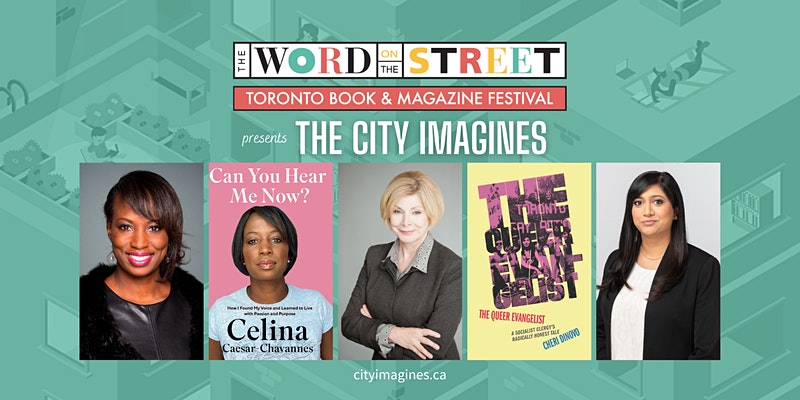 About This Event
What does it take to take a stand? Hear from two wave-makers in Canadian politics Celina Caesar-Chavannes and United Church minister Rev. Dr. Cheri DiNovo, CM on what it means to be a passionate and effective advocate for the communities you represent.

About The Books
Celina Caesar-Chavannes, already a breaker of boundaries as a Black woman in business, got into politics because she wanted to make a bigger difference in the world. But when she became the first Black person elected to represent the federal riding of Whitby, Ontario, she hadn’t really thought about the fact that Ottawa wasn’t designed for someone like her. Both memoir and leadership book, Can You Hear Me Now? is a funny, self-aware, poignant, confessional and fierce look at how failing badly and screwing things up completely are truly more powerful lessons in how to conduct a life than extraordinary success. They build an utter honesty with yourself and others that allows you to say things nobody else dares to say–the necessary things about navigating the places that weren’t built for you and holding firm to your principles. And, if you do that, you will help build a world where inclusion is real.

In The Queer Evangelist, Rev. Dr. Cheri DiNovo, CM shares her origins as a young socialist activist in the 1960s, and her rise to ordained minister in the ‘90s and New Democratic member of provincial parliament. Interspersed with her political work, DiNovo describes her conversion to religious life with radical intimacy, including her theological work and her ongoing struggle with the Christian Right. Cheri DiNovo’s story shows how queer people can be both people of faith and critics of religion, illustrating how one can resist and change repressive systems from within.

The City Imagines series is presented by The Word On The Street, a national celebration of storytelling, ideas, and imagination.

About The Presenters
Celina Caesar-Chavannes is an equity and inclusion advocate and leadership consultant, and a former Member of Parliament who served as parliamentary secretary to Prime Minister Justin Trudeau and to the Minister of International Development et la Francophonie. During her political career, Celina advocated for people suffering with mental illness and was given the Champion of Mental Health Parliamentarian Award in May 2017 by the Canadian Alliance on Mental Illness and Mental Health. Before entering politics, she was a successful entrepreneur, launching and growing an award-winning research management consulting firm, with a particular focus on neurological conditions.

Rev. Dr. Cheri DiNovo, C.M. is the minister at Trinity-St. Paul’s United Church in Toronto. She is a Member of the Order of Canada, recognized for her contributions to provincial politics and her lifelong advocacy of social justice. A former Ontario MPP, Cheri passed into law more pro-LGBTQ legislation than anyone in Canadian history.

Supriya Dwivedi is a former talk radio host and campaign advisor, currently working as Senior Counsel for Enterprise Canada, a national strategic communications firm. In addition to appearing weekly on CBC’s Power & Politics, Supriya’s political insights are regularly sought out by a myriad of outlets, both national and international.

Word on the Street