A Dickens of an Evening! A Christmas Carol! 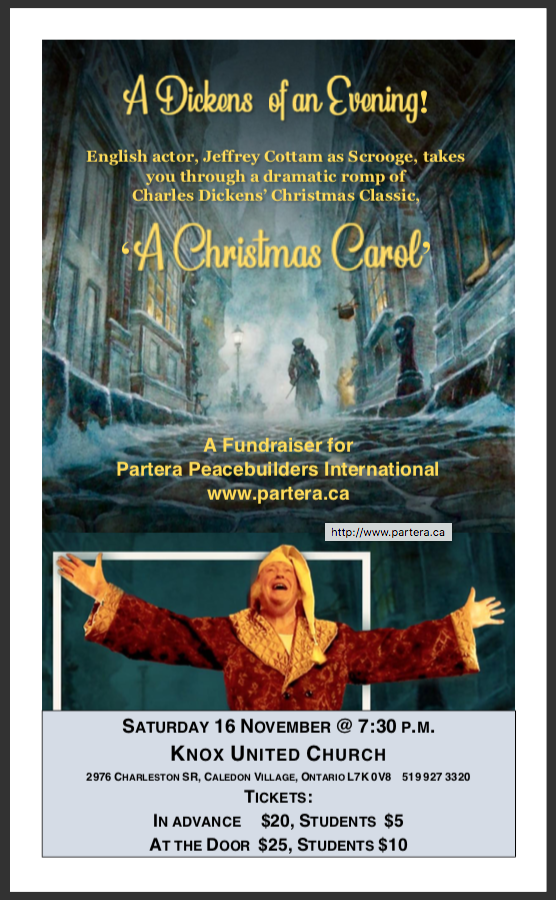 A Dickens of an Evening brings the community in ahead of Christmas for an evening of entertainment, inspiration and learning. It speaks to issues of social justice and peace, bringing together the injustices of Dickensian England and those of our day. It’s a cautionary tale and it’s an opportunity to support a local organisation doing peacemaking in zones of conflict around the world – and at a time of year when we are marking the birth of the Prince of Peace.

The original music for this performance has been created by award-winning Canadian composer, musician and musical engineer Bruce Ley who has written over 1,000 hours of musical score for television and movies.

All proceeds go to Partera!
PARTERA PEACEBUILDERS INTERNATIONAL:
Rev’d Lee Ann McKenna is the founding Director of Partera, an incorporated non-profit. She is the recipient of the Peace Medal from YMCA Canada in 2010 for her peace initiatives in areas of conflict around the world. Partera is Spanish for midwife, referring to methods of popular education that cast the trainer in the role of companion rather than expert. Together they create the conditions within which participants can labour together for that future for which they yearn.